When Al-Abbas noticed the loneliness of his brother and the martyrdom of his companions and household, he advanced towards his brother and asked for permission to fight. The Imam did not permit him and he said with sad tone, "You are the holder of my standard."

Imam Al-Hussayn (peace be upon him), in fact, felt security and protection so long as Al-Abbas (peace be upon him) was with him. But Al-Abbas insisted on the permission and said, "I can no longer stand it. I want to take avenge upon those hypocrites."

As the Imam had nothing to do other than permitting his brother to fight against the enemies, he asked him first to try to get water for the harem and children who were gravely thirsty. Hence, Al-Abbas directed towards the Umayyad army with words of admonition and warned against God's punishment. He directed his speech to their commander: "Omar ibn Saad, this is Al-Hussayn son of the daughter of Allah's Messenger. You have killed his companions and household. These now are his children and harem. They are thirsty and I ask you to give them water. Nevertheless, he is still calling you to let him go to Rome or India and leave Hijaz and Iraq for you"

None from the Umayyad army could answer Al-Abbas except Shemr who said to him, "Son of Abu-Turab, if the whole surface of this earth is water controlled by us, we will not give you a single drop of it before you submit to the leadership of Yazid."

Hence, Al-Abbas had to report this situation to his brother.
Meanwhile, he heard the cries of the children because of thirst and saw the change in their faces and the dryness of their lips. Therefore, he decided to fetch water for them. He rode his horse, took a waterskin with him, and rode towards the River Euphrates. The Umayyad troops fled and he alone occupied the banks of the river. His heart was as hot as fire because of thirst, but when he extended his hand to the water and tried to drink, he remembered the thirst of his brother, as well as his children and harem; hence, he threw away the water from his hand and said:
My soul, you must be preceded by Al-Hussayn
And you must not continue to exist after him
Al-Hussayn is about to drink from cups of death
While you want to drink from this cold water
No, by Allah! This is not my religion!


After this tremendous demonstration of altruism that exceeded any other in all dimensions of time and space, Al-Abbas filled the skin carrier he had with him with water and took it on the way back to his brother's camp.

In the meantime, the enemies surrounded him from every side and tried to prevent him from taking that water to his brother's camp. Al-Abbas spared no efforts in fighting against them and caused them big losses.

Chased by terror and fear, the enemies were fleeing away from Al-Abbas who was like his father in courageous situations. However, one of the filthy hypocrites of Kufa waylaid him from behind a date palm tree, striking him from the back on his right hand, and cut it. Nevertheless, Al-Abbas the hero did not care for so when he held the standard in his left hand and went on saying:
By Allah, if you cut my right hand
I will keep on defending my religion
And that true-tongued Imam
Who is the son of the pure Prophet


A few moments later, another man hidden behind a tree, struck Al-Abbas with a sword on his left hand, and cut it. Although he was bleeding and suffering these wounds besides thirst, Al-Abbas held the waterskin with his teeth and hurried trying to take the water to his brother's children and harem.

Meanwhile, a spear hit the waterskin and caused that water to dribble onto the ground. Seeing this, Al-Abbas was struck with sadness and perplexity. He did not know what to do. A few moments later, another man attacked him with an iron post and struck on the head. Al-Abbas fell to the ground and shouted, "Peace be upon you, Abu-Abdullah!"

As the Imam heard these words of farewell, he hurried toward the River al-Alqami where Al-Abbas fell. He pushed himself through the troops of the enemies and threw himself on the body of his brother. Expressing the grave misfortune that he suffered by the martyrdom of his brother, Imam Al-Hussayn (peace be upon him) wailed, "My spine is now broken and I have lost everything and my enemies are rejoicing at my misfortune."

No one can describe the real feelings that Imam Al-Hussayn felt after the martyrdom of Al-Abbas. However, historians have mentioned that he, as he was leaving the dead body of his brother, could hardly move his feet. He went towards the camp while he was wiping off his tears. His daughter Sukayna received him with the question, "Where is my uncle Al-Abbas?"

Here the Imam wept and told her about her uncle's martyrdom. The daughter had nothing to do other than moan aloud. The situation was more difficult for Zaynab who put her hand on her heart and shouted aloud, "O, brother Al-Abbas. We have certainly lost everything as we lost you."

It was surely grave misfortune for Imam Al-Hussayn and the Prophet's harem whose cries and moaning for their guardian and protector filled that place.


The Imam (peace be upon him) also participated with them in weeping as he cried:
"We have surely lost everything as we lost you, O Abu Al-Fadl Al-Abbas." 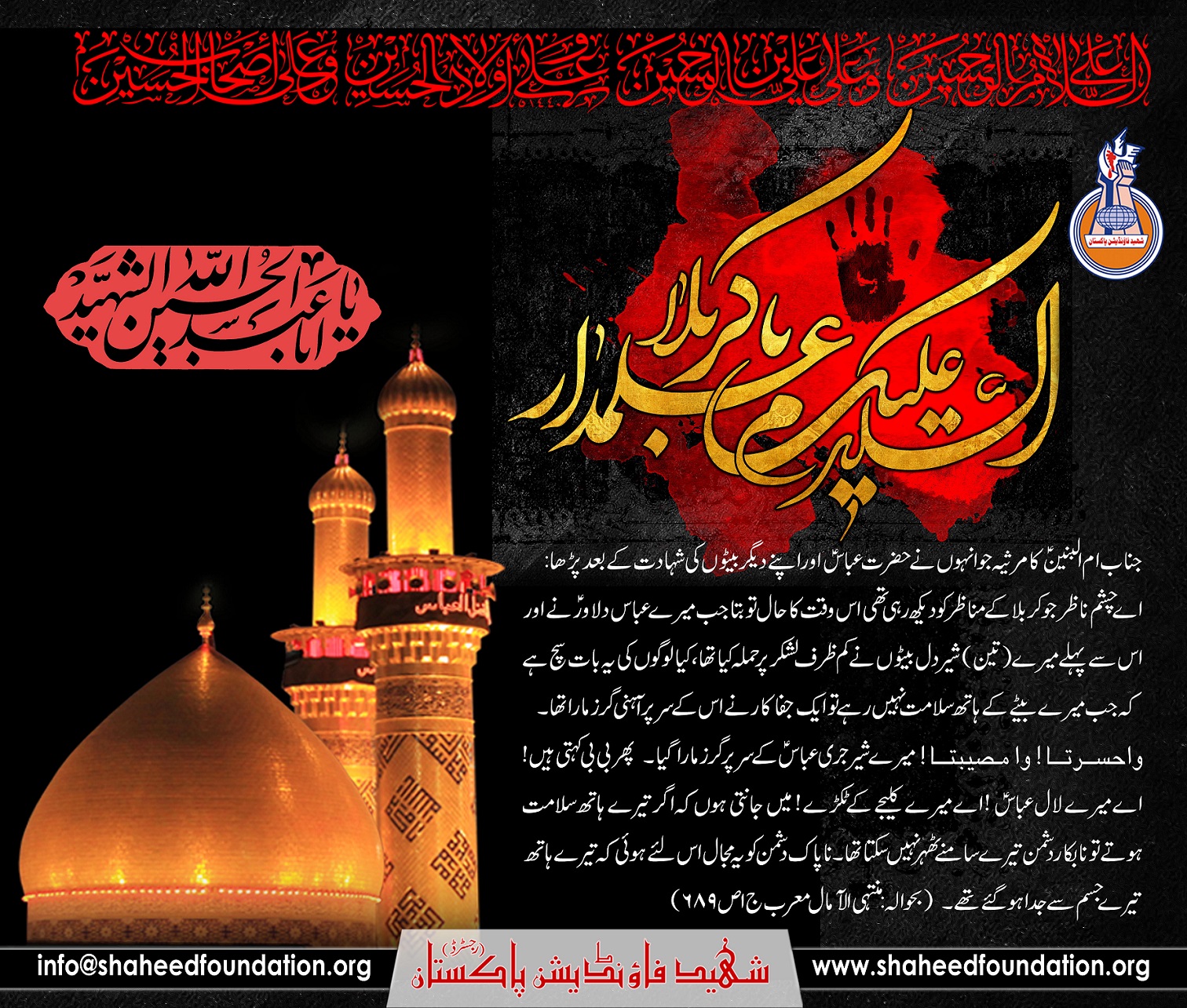