It was five years after the Muslims had accompanied the Prophet (pbuh&hf) and his family in the migration (Hijrah) to Medina, when the Holy Prophet's daughter, Bibi Fatima(s.a.), gave birth to a little girl. When her father, Imam Ali(a.s.), saw his daughter for the first time Imam Hussain(a.s.), who was then almost three years old, was with him. The boy exclaimed in delight, "O father, Allah has given me a sister." Hearing those words Imam Ali (a.s.) began to weep, and when Imam Hussain(a.s.) asked why he was crying so, his father answered that he would soon come to know.

Bibi Fatima(s.a.) and Imam Ali(a.s.) did not name their child until a few days after her birth, for they awaited the Prophet(pbuh) to return from a journey so that he could propose the name. When finally the baby girl was brought before the Prophet (pbuh), held her in his lap and kissed her. The Angel Jibra'il came to him and conveyed the name that was to be hers, and then he began to weep. The Prophet (pbuh) asked why Jibra'il wept and he answered, "O Prophet of Allah. From early on in life this girl will remain entangled in tribulations and trials in this world. First she will weep over your separation (from this world); thereafter she will bemoan the loss of her mother, then her father, and then her brother Hassan. After all this she will be confronted with the trials of the land of Karbala and the tribulations of that lonely desert, as a result of which her hair will turn grey and her back will be bent."

When the members of the family heard this prophecy they all broke down in tears. Imam Hussain(a.s.) now understood why earlier his father had also wept. Then the Prophet (pbuh&hf) named her Zainab(s.a.). When the news of the birth of Bibi Zainab(s.a.) reached Hazrat Salman al-Farsi(a.r.), he went to Imam Ali(a.s.) to congratulate him. But instead of seeing him happy and rejoicing he saw Imam Ali(a.s.) shed tears, and he too was apprised of the events of Karbala and the hardships that were to befall Bibi Zainab(s.a.).

The name Zainab comprises of two parts: "Zain" meaning adornment and ornament and "ab" meaning father. Thus, Zainab means "father's ornament". To Hazrat Zainab, she was her father's ornament and his school of thought and doctrine. When Zainab (A.S.) would speak, everybody would think that as if Hazrat Ali (A.S.) is speaking.

Growing up in Medina

In her character she reflected the best attributes of those who raised her. In sobriety and serenity she was likened to Umm ul-Muminin Khadija, her grandmother (AS); in chastity and modesty to her mother Fatima Zahra (AS); in eloquence to her father Ali (AS); in forbearance and patience to her brother Imam Hasan (AS); and in bravery and tranquility of the heart to Imam Husayn (AS). Her face reflected her father's awe and her grandfather's reverence.

She had barely attained the tender age of seven when her beloved mother passed away. Her mother's death had closely followed her cherished grandfatherÃ¢â‚¬â„¢s passing away. Sometime later Imam Ali (AS) married Umm ul-Banin, whose devotion and piety encouraged Zaynab (AS) in her learning.

When the time came for marriage, she was married in a simple ceremony to her first cousin, Abdullah ibn Ja'far Tayyar. Abdullah had been brought up under the direct care of the Prophet (PBUH&HF). After his death, Imam Ali (AS) became his supporter and guardian until he came of age. He grew up to be a handsome youth with pleasing manners and was known for his sincere hospitality to guests and selfless generosity to the poor and needy.

Bibi Zainab a.s had five children, of whom four were sons, Ali, Aun, Muhammad, and Abbas, and one daughter, Umm Kulthum.

In Medina it was Zaynab's practice to hold regular meetings for women in which she shared her knowledge and taught them the precepts of the Deen of Islam as laid out in the Holy Quran. Her gatherings were well and regularly attended. She was able to impart the teachings with such clarity and eloquence that she became known as Fasihah (skillfully fluent) and Balighah (intensely eloquent).

During the era of Hazrat Ali's caliphate, a group of learned women from Kufa sent their respective husbands to Hazrat Ali (A.S.)with a message as follows: 'We are informed that Hazrat Zainab, like her mother Hazrat Fatemah,posseses numerous knowledge. Thus, if you allow us, we would like to seek benefit from her knowledge."Hazrat Ali (A.S.) agreed to their request. The women of Kufa attended her classes and derived benefit from the ocean of her knowledge. Among their lessons, one could find "Tafsir" (interpretation) of the holy Quran.

In the thirty-seventh year A.H. (after Hijrah), Imam Ali (AS) moved to Kufa to finally take up his rightful position as khalifah. He was accompanied by his daughter Zaynab (AS) and her husband. Her reputation as an inspiring teacher among the women had preceded her. There too women would throng to her daily sittings where they all benefitted from her erudition, wisdom and scholarship in the exegesis of the Qur'an.'

The depth and certainty of her knowledge earned her the name given to her by her nephew, Imam Ali Zayn ul-Abidin (AS), of 'Alimah Ghayr Mu'allamah, 'she who has knowledge without being taught'.

Zaynab (AS) was also nicknamed Zahidah (abstemious) and 'Abidah (devoted) because of her abstemiousness and piety. She found little of interest in wordly adornments, always preferring the bliss and comfort of the Next World over that of this world. She used to say that for her the life of this world was as a resting place to relieve fatigue along a journey.

Humble and of high morals, her main concern was to strive to please Allah and in doing so she avoided anything which was the least bit doubtful.

Sayyeda Zainab (sa) is the shining sun in the history of Islam and of humanity. Her brother's name and Karbala associate the idea of freedom, justice, humanity, virtue, fighting against despotism, with the realization of the sovereignty of Allah (SWT). The history of Karbala is based on two pillars: the rising of Imam Hussein (as) and the rising of Sayyeda Zainab (sa). She was an outstanding figure in the history of Karbala endowed with divine steadfastness and fortitude. She sacrificed her two sons and one should not say anything if one devoted his life for the cause of Allah (SWT). After the martyrdom of her brother and her two sons, she said: "O my Lord! Accept our humble sacrifice to You."

When Zainab s.a reached Kufa, she addressed people with fury words: "Praise to Allah, and may the blessing of Allah be upon Muhammad and his progeny. O people of Kufa, you are hypocrites and deceitful. You feign to be sorry for the death of my brother and his companions. May you always shed tears. I find nothing in you but flattery, evil acts and thoughts, pride and spite and ill will. By Allah (SWT)! You deserve lasting sorrow instead of joy. Shames on you, your hands are imbrued with the blood of the son of Prophet Muhammad (saw), the one who was your sole refuge in case of adversity. By your evil act and disloyalty, you incurred the wrath of Allah (SWT) against you. Woe betides you! No one will intercede with Allah (SWT) for you." Her furious words provoked people of Kufa to avenge Imam Hussein's martyrdom. This frightened Ubaidullah ibn Ziyad and his cruel agents. She also delivered a furious sermon in the court of the caliph that made his authority and despotic rule feel undermined. She said: "I fear no one but Allah (SWT). Make whatever evil plot you can. Blazes are waiting for you in the hereafter. You'll he accountable to Allah (SWT) for your atrocities."

The Foundation of Mourning (Majalis-E-Aza) of Imam Hussein (as)

Another unique feature of Sayyeda Zainab's (sa) character was her establishment of mourning ceremonies. This tradition which has lived in the memories and hearts of millions of Muslims to this day, has kept the sacrifices of Imam Hussein (as) alive, and brought dynamism to every movement that aimed at removing injustices on earth.

After every Majlis, the women would offer their condolences to Sayyeda Zainab (sa) and the men to Imam Zainul Abedeen (as). These majales made quite a stir in the cities, and the sound of crying and beating of chests and heads affected the minds of the inhabitants, and made them sadder and wiser to the events of Karbala. 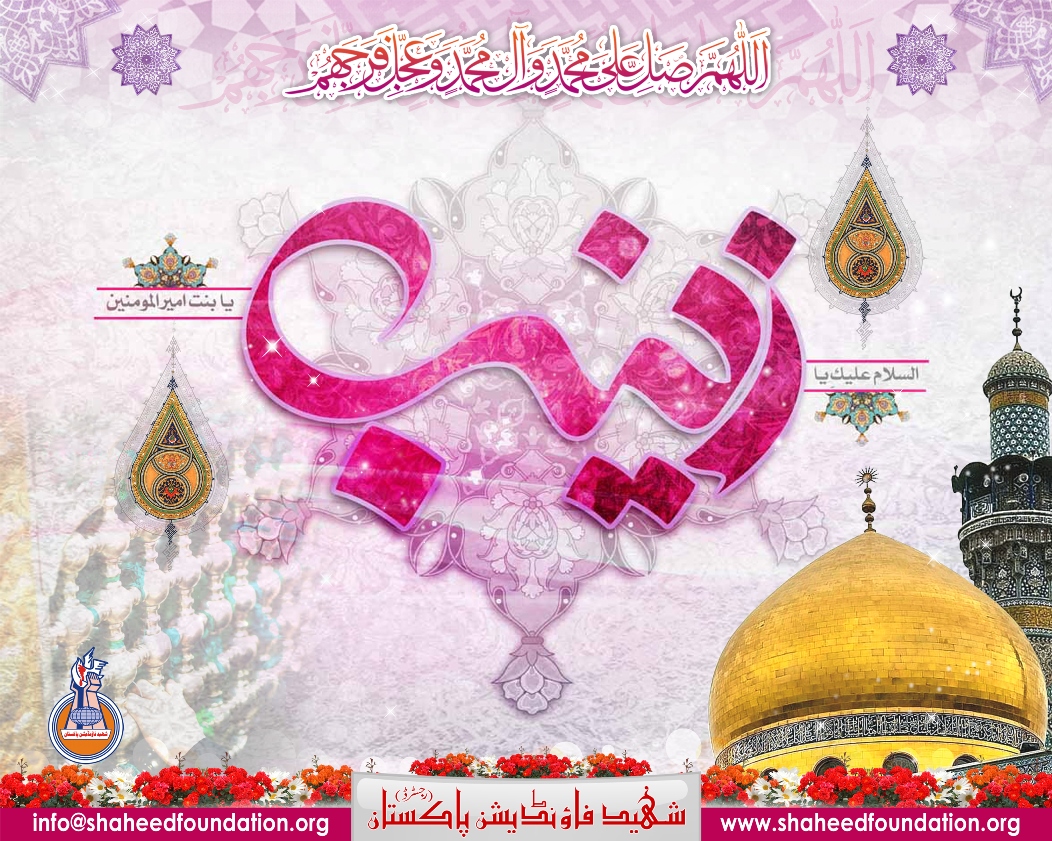