In 203 A.H./ 818 A.D., Mamun set out for Baghdad and asked Imam Reza (A.S.) to accompany him. At Sarakhs, he assassinated Fazl ibn Sahl, the famous minister and commander of the civil military forces of the Abbasid caliphate.

During that day after saying his noon prayers in seriously ill condition, he summoned one of his private servants and inquired whether the other servants had had their lunch.
"My lord, how can we eat food when we witness you are seriously ill in bed?", answered the man.

Suddenly the Holy Imam (A.S.) was seized with intensive pain and languor, and consequently fainted. The holy soul of the innocent Holy Imam (A.S.) departed to heaven and the entire world of faith and sincerity fell into lamentation.

After hearing about the Holy Imam`s martyrdom, the people started gathering around Holy Imam`s residence and the noise of wailing and crying increased. The mourners considered Mamun as the murderer of the Holy Imam (A.S.).

Being scared of a funeral procession at day time, Mamun contrived to have the burial ceremony done in the dark of night. Caliph ordered his men to inter the holy remains of Imam Reza (A.S.) at the feet of his accursed father Harun al-Rashid, but could not, since on all three sides hard rock was found and the only place possible for burial was the spot marked by the Holy Imam (A.S.), above Harun`s grave, which was situated in Humaid bin Qahtabah`s palace garden. Thus the Holy Imam (A.S.) was buried in the solitude of night at the same place which His Holiness had prophesied during his first visit to Humaid bin Qahtabah`s palace at Sanabad in 201 A.H.

Hearing the sad news of Imam Reza (A.S.) martyrdom, De`bel Khozaee, the celebrated Arab poet wrote an elegy in praise and commemoration of His Holiness. The following is a translated theme of the purport of that famous ode:
"Two graves are located in Toos. One belongs to the best man (Imam Reza (A.S.),) while the other is occupied by the worst creature (Harun, Ma`mun`s father). This serves as an example for others.

That wicked spirit can gain no benefit from its nearness to the pure body of the Holy Imam (A.S.), and the sacred remains of His Holiness will not be polluted by its foul neighbor."

The holy shrine of Imam Reza (A.S.) is a sacred centre of pilgrimage for the faithful visitors who earnestly and humbly arrive in millions every year in the holy city of Mashhad.

Once a small village called Sanabad transformed into a great metropolis by the presence of the holy shrine of Imam Reza (A.S.). 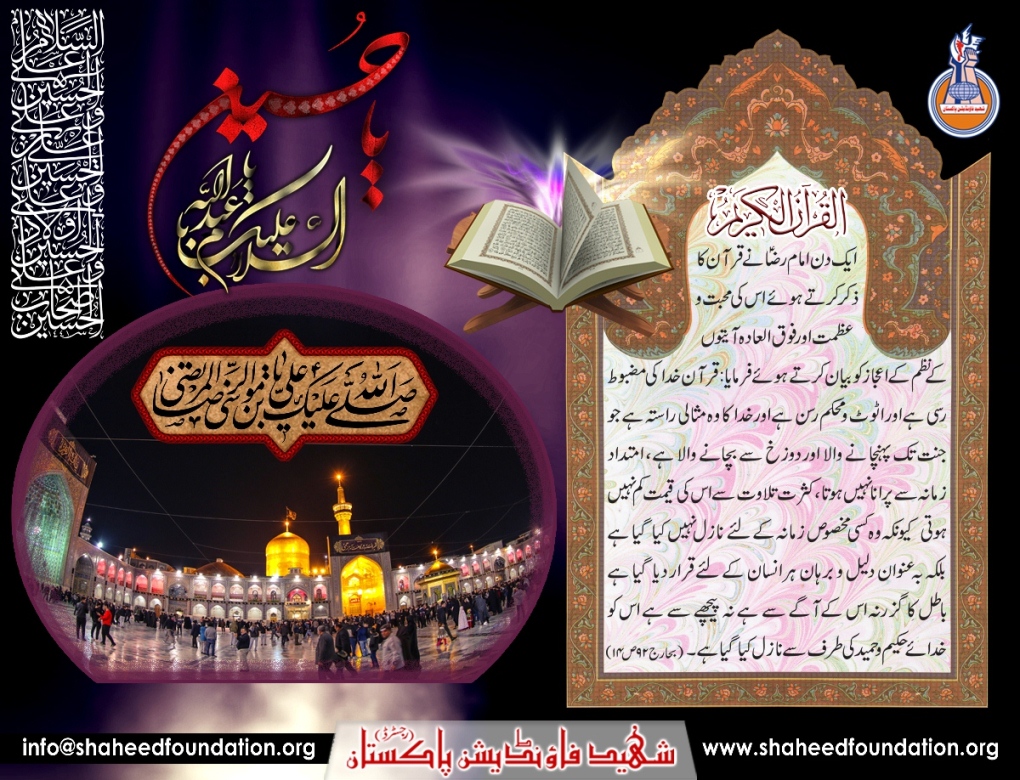